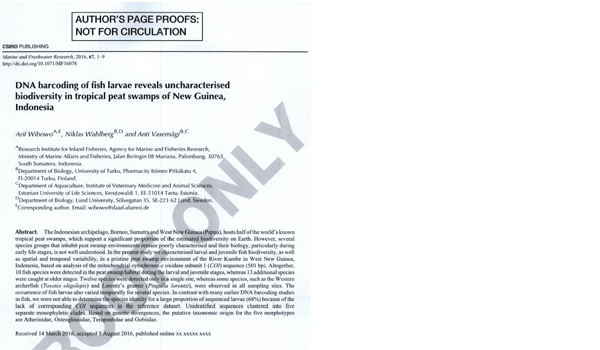 The Indonesian archipelago, Borneo, Sumatra and West New Guinea (Papua), hosts half of the world's known tropical peat swamps that support significant proportion of the estimated biodiversity on earth. However, several species groups that inhabit peat swamp environments remain poorly characterized and their biology, particularly during early life stages, is not well understood. Here, we characterized larval and juvenile fish biodiversity as well as spatial and temporal variability in a pristine peat swamp environment of the River Kumbe in West New Guinea, Indonesia based on mitochondrial COI sequence (501 bp) analysis. Altogether, ten fish species were detected in the peat swamp habitat during the larval and juvenile stages, whereas 13 additional species were caught at older stages. In contrast to many earlier DNA barcoding studies in fish, we were not able to determine the species identity for a large proportion of sequenced larvae (68%) because of the lack of corresponding COI sequences in the reference dataset. This study represents an important step towards the establishment of comprehensive DNA barcode reference library for teleost fish from tropical peat swamp environment and demonstrates that molecular identification of freshwater fish of New Guinea Island is still at the early stages of development.